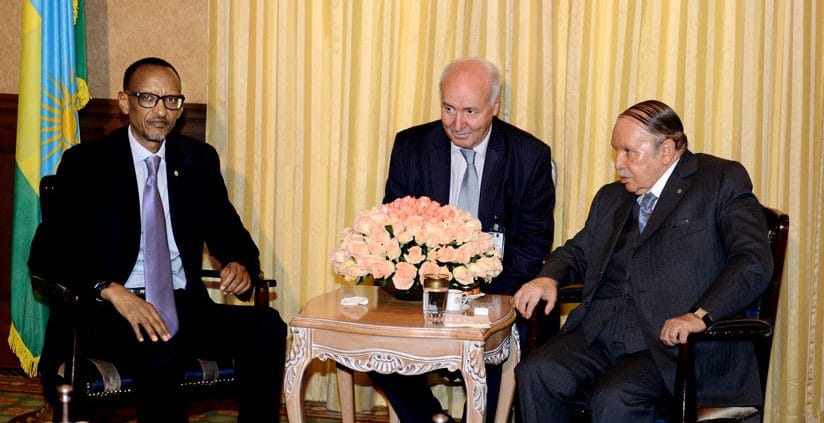 President Paul Kagame and his Algerian counterpart, Abdelaziz Bouteflika, have agreed to cement bilateral cooperation and discussed how similar relations can be pushed across to attain socioeconomic development and security.

President Kagame was on a three-day visit to the West African nation where he also met with Prime Minister Abdelmalek Sellal, and speaker of Algerian parliament, Abdelkader Bensalah.

Kagame’s visit to Algeria was meant to review and re-energize the four decades bilateral relations between the two countries. Algeria and Rwanda are linked by good relations since the 1970s, especially in diplomacy, Kagame told journalists after a meeting with President Bouteflika.

For Bouteflika, Kagame’s visit was an opportunity for the two countries, which share longstanding friendship ties and cooperation, to exchange at the highest level views on issues of common interest, particularly regarding Africa.

Rwanda and Algeria share a long history of liberation struggles. When Rwanda got independence from Belgium in 1962, Algeria was ending an eight year-long war against French colony, which saw then French President Charles De Gaulle pronounce Algeria an independent country on July 3, 1962.

Kagame said that “The long history of liberation of Algeria informed many other countries, including ours.”
Kagame, who was accompanied by Foreign Affairs Minister, Louise Mushikiwabo and Defence Minister Gen. James Kabarebe, ended his tour of Alegeria with a visit to the Tipaza Archaeological Park. He also visited the Martyr’s Sanctuary and Mujahid Museum which preserves Algerian historical facts.

In a book he signed, Kagame wrote: “I am happy to learn about this important history of this great country ».

Algerian Khadidja Ladjel re-elected At UN Convention On Rights of All Migrant...